The ‘Contemporary Context’ project begins on Thursday, 17 September. It was designed as series of talks with the artists and cultural workers who currently live and work in Novi Sad and who are active on the artistic scene. You’ll be able to follow the shows, i.e. podcasts, of the Multimedia centre Led Art project, on the Cultural Stations Facebook page. The first guest will be an artist of younger generation, Adrienn Újházi. Besides the podcast, visiting artists will have their exhibitions in the space of ’Šok Zadruga’ as well. 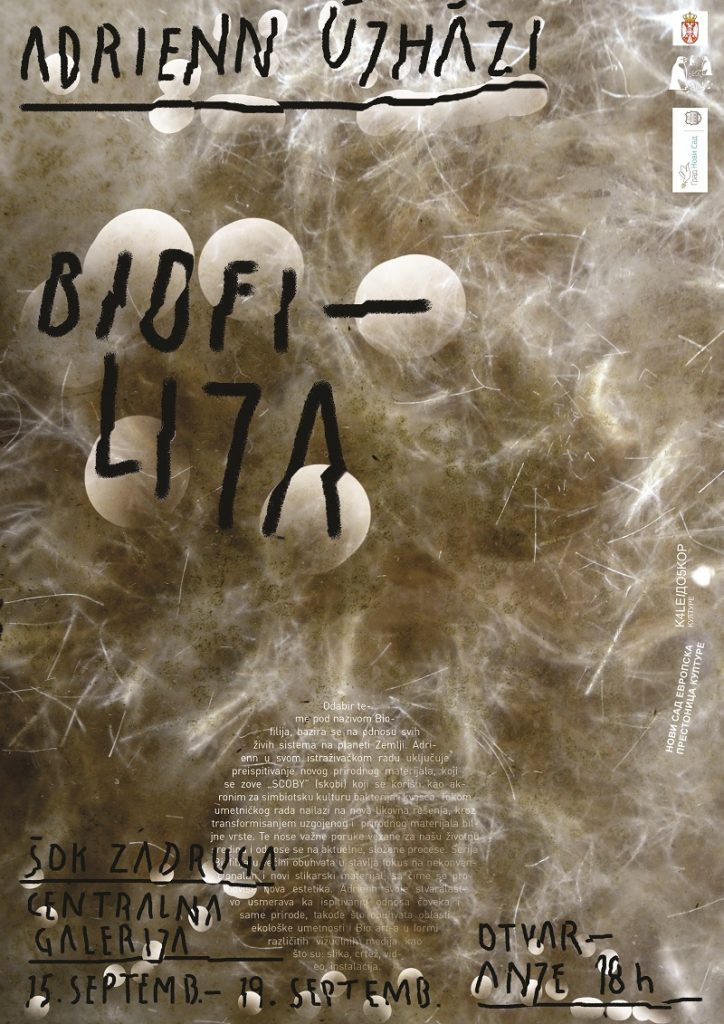 The podcast format was chosen because of its convenience, since it enables streaming on social media, websites, radio programmes, and it also allows for big number of streaming platforms and for listeners to choose their own time for listening and watching the podcast, whenever it suits them, says Željko Grulović, person behind the project. The main motif for the ’Contemporary Context’ project came from the need to point out to the lack of content dealing with contemporary art in a serious and dedicated way.

’Today, most of media that deals with culture, usually advocates spreading the content that’s oriented towards mainstream culture. Of course, there are televisions and radio stations that are very professional and that pay attention to those topics, but unforutantely their audience is small, usually it’s strictly people that are interested in those particular subject matters. In order for people to become not only more culturally and artistically educated, but more acquainted with contemporary age as well, shows that would broadcast such content must be streamed on the most-watched channels, and country and regulation services are in charge of that. Thus, we are trying to broadcast certain content, but also point out the lack of them in the most popular media. When it comes to contemporary art, it’s in the hands of individuals, artists themselves and cultural workers (curators, art historians, producers, gallerists). However, I do think that understanding the importance of contemporary artistic practices is slowly coming into focus. It’s seen through disputes and conflits regarding certain artists and monuments that are being more and more popularized,’ says Grulović, explaining the reasons for initiating the project.

In the context of pandemic, being unable to create and work at one’s full capacity, Grulović believes the Public call for supporting local scene, within which the ’Contemporary Context’ project was given funds, is a great opportunity for emphasizing the importance of investment in the artistic production. He believes such format of the Call is necessary for the scene, regardless of the situation involving pandemic. Grulović sees the transfer of cultural and artistic contents to the online world in the last couple of months as a chance for creating new audiences.

’My personal impression is that, transfering the content to the virtual, digital world possibly opened the door for new audiences, people who didn’t have an opportunity to familiarize with the artistic content, thus it enabled at least some kind of work and also communication between participants on the scene (audience, authors, galleries..). However, it can’t and shouldn’t replace in vivo artistic practice, which is much more than a simple, square monitor,’ says Grulović.

Level at which artistic production and investment in artistic production functioned, was something to complain about to the ’Novi Sad – European Capital of Culture’ project itself, however, as Grulović says, some steps forward are made, especially when it comes to communication.

This project is one of the 42 projects that received funds within the ‘Artists. Now!’ public call of the ‘Novi Sad 2021 – European Capital of Culture’, aimed at strengthening local cultural scene, raising its capacities through a network of cultural stations, decentralisation of culture and audience development.