Promotion of the book ‘Rebellion of Children of Socialism’ by the author Dušan Vesić will be held on Friday 21st of August in the Svilara Cultural Station, starting at 8 p.m.

The audience will be able to follow discussions about the book online via Student Cultural Centre Novi Sad Facebook page.

Discussions will be broadcasted on Cultural Stations and Svilara Cultural Station Facebook pages as well. Besides the author, Nenad Baraković, Bogica Mijatović and Jovan Gvero will also speak at the book promotion. 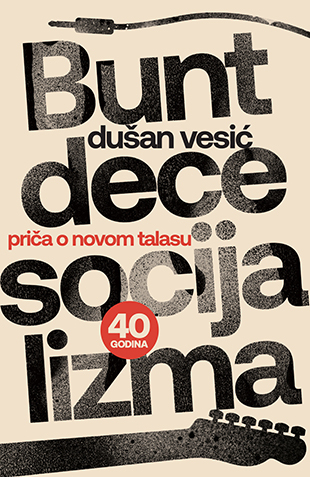 With his book ’Rebellion of Children of Socialism’ about the first generation of new wave bands, Dušan Vesić wraps up the trilogy about the most important moments of Yugoslavian rock culture. This is the first, systematic, detailed book about that period. It is an inexorable chronicle written in Vesić’s characteristic style which Branimir Štulić compares to the one of Borges, but with a lot of interesting and less known facts.

’This book, thus, is inevitably my own experience of that time, but I tried really hard not to make it some kind of personal fiction. I wanted readers to get a clear idea about both the characters from the book and the relationships between them. It’s much more in the relationships between people than it is in the details, and it’s especially less in the lists’, said Vesić in the preface.

Vesić plays a double role here: he is at the same time both a direct observer who lived through the beginnings, climax and ends of the new wave, and a careful and discreet chronicler who, though distanced temporally but not emotionally, evokes and brings closer the cultural epoch precisely and vividly. For those not recalling the epoch, the book will show them why this period is still spoken about even forty years after. New wave? As if it was yesterday!

Dušan Vesić was born in Belgrade in 1959. He is said to be one of the most important rock journalists of former Yugoslavia in the period from 1980 and until 1990. He wrote for almost every relevant newspaper or magazine from that time, promoting rock culture. He was the editor for the local scene in the magazines ’Rock’ and ’Pop Rock.’

He was a director of the festival of entertainment music ’Beogradski šlager – Menadžer.’  From 1996 he has been working on video production. He is the author of a cult documentary television serial ’Rokovnik’ as well as TV series and film ’EKV– Kao da je bilo nekad.’ He lives in Belgrade and Pula.