Novi Sad 2021 – Good Example of Connecting the Local and European

‘Novi Sad 2021’ is the only European Capital of Culture invited to participate in the central annual event dedicated to the topic of cultural heritage – ‘European Cultural Heritage Summit’. Summit is held in Berlin from 18 until 24 June and EU recognised it as one of the most important public events within the European Year of Cultural Heritage.

Mr Nemanja Milenković, CEO of the ‘Novi Sad 2021’ Foundation, had truly inspiring introductory speech before the ‘Bridging Local and European’ session, within the ‘Sharing Heritage – Sharing Values’ European Policy Debate in Berlin. Mr Milenković presented the ‘Novi Sad 2021 – European Capital of Culture’ project pointing out the main values and beliefs that are starting points towards completing the mission of the Foundation, which is to design and present programmes that use culture as a catalyst for development of the cultural capacities of the city and contribute to increasing visibility of Novi Sad on the local and international scenes. Mr Milenković stated that the title of the European Capital of Culture is a chance to build bridges in sense of overcoming differences at a local level. 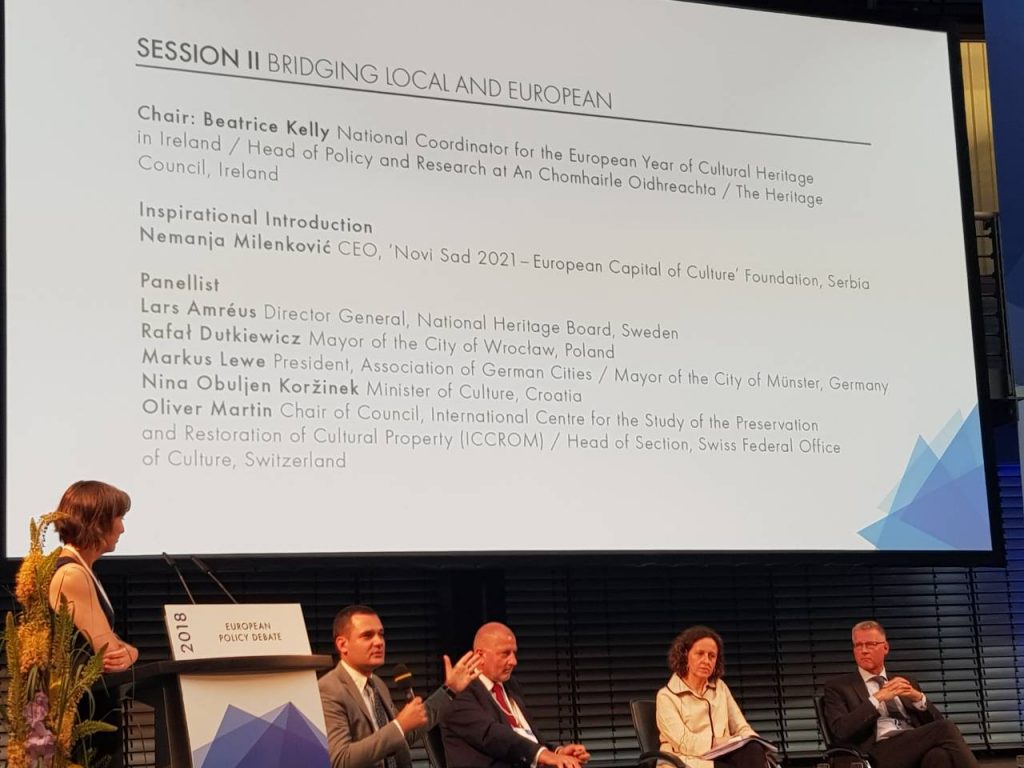 Besides Mr Milenković, participants of the debate were Lars Amréus, general director of the Committee for National Heritage in Sweden; Rafał Dutkiewicz, Mayor of Wrocław; Markus Lewe, President of the Association of German Cities and Mayor of Münster; Nina Obuljen Koržinek, Minister of Culture of Croatia; Oliver Martin, President of the Council of the International Centre for the Study of the Preservation and Restoration of Cultural Property and Head of the Swiss Federal Office of Culture, Switzerland. The session was presided by Beatrice Kelly, National Coordinator for the European Year of Cultural Heritage and Head of Policy and Research of the Heritage Council in Ireland.

One of the basic conclusions of the session is that local, national and European levels should complement each other, strengthening and engaging citizens through culture.

The idea of the ‘European Cultural Heritage Summit’ is to engage, gather and include various interest groups, decision-makers and cultural managers in order to involve them in the implementation of very ambitious programme in the Year of Cultural Heritage. The Summit was attended by representatives of European institutions, European member countries and organisations of the civil society from across Europe.