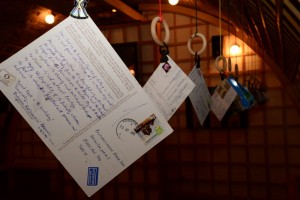 Just a month before the submission of the application of Novi Sad for the European Capital of Culture in 2021 ‘Support by Post’ has arrived in Novi Sad. At the initiative of Márton Méhes Artistic Director of the project Pécs 2010 artists from other European countries have been sending postcards with messages of support to our candidacy for the past three months. The opening ceremony of the ‘Support by Post’ exhibition took place at the ‘ITD’ Gallery at the Petrovaradin Fortress on 14 September.

– In preparation for this great event I have researched history of postcards and found out that the first painted postcard had been written, designed, drawn and sent by the English writer Theodore Hook in 1840. His postcard was some kind of joke. He sent a postcard with a caricature of a postman to himself. What can we learn from this story? The first postcard was sent by an artist and the postcard itself was a work of art. What we can see at this exhibition is the same thing – these postcards were sent to you by artists from European cities and often they painted them themselves. They did it with joy and good intentions. Therefore Novi Sad has received a lot of positive energy with these good messages and wishes for winning the title of the European Capital of Culture – said Márton Méhes opening the exhibition and thanked the Project Novi Sad 2021 and the designer Branislav Radošević on the original and modern setting of postcards of European artists.

The ceremony was attended by other senior officials from European cities who have been supporting Novi Sad on the road to candidacy since 2011 when the Novi Sad Council made a decision to candidate: Ulm, Košice, Timișoara, Sibiu, Larissa, Osijek, Pécs, and others as well as large audience among which were there were the artists from the ‘Art Circle’ association from the Petrovaradin Fortress.

The exhibition of postcards is set at the ‘ITD’ Gallery – Branislav Radošević’s Institution for Design Transfusion, in the first studio on the Fortress, near the clock tower. The exhibition will be open until Monday 28 September, and ‘ITD’ Gallery is open from 10 a.m. to 10 p.m. every day including weekends.

On the same evening, visitors could see ‘Vojvodina – a Nursery of Multinational and Multicultural’ project by Branislav Radošević Art Director of ‘ITD’ Gallery. ‘Nursery’ is a visual presentation of Vojvodina as a European multinational and multicultural region with all its wealth of cultural diversity and diversity that Vojvodina owns and artefacts that make this project, speak in favour of that that.