Annual Conference, Novi Sad on its way towards the European Capital of Culture 2021 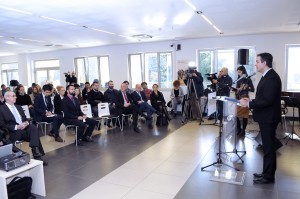 On Thursday, 18 December 2014, the annual conference of the Organisation Board for the initiative of Novi Sad to bid for the title of European Capital of Culture in 2021 was held. It presented the draft strategy, new visual and brand identity and the first of many projects for the following year. Member of the City Council in charge of Culture, Vanja Vučenović, Chairman of the Organisation Board of the project Novi Sad 2021, Andrej Fajgelj, Deputy Mayor of Osijek, Vladimir Ham, Director of the Company for Urban Development of Pécs, Peter Merza and Head of the Department for Cultural Activities of Bijeljina, Slavko Bašić addressed the audience and media.

The conference presented the draft strategy Novi Sad 2021, the strategic document made by the members of expert team. The draft strategy was presented by Goran Tomka, who worked on its drafting together with his colleagues. After that, new brand and visual identities, i.e. design of the candidacy, were presented. Following the long standing practice of previous European Capitals of Culture, authors of the visual identity focused on the importance of the year of the title. In this way, it was insisted on symbolic meaning of numbers of the year of the title, but they also taken into consideration certain symbols of Novi Sad.

The intention of the City and Board for the following year is to include experts in the project, who could contribute to winning this title.

– This project brings a lot to our city, primarily investments and more significant positioning of the city on the map of cities of culture in Europe and the world. This will be the chance for the city to be finally reconstructed in sense of culture, to provide stronger and better conditions for culture. Stronger and more intensive concept and realisation of projects for enrichment and strengthening of culture is the only condition for winning this prestigious title – said Vučenović and announced that in 2015 and 2016 new music and ballet schools will be built on Boulevard of Car Lazar, as well as the concert hall that is missing.

Chairman of the Organisation Board, Andrej Fajgelj, also said that this project is crucial.
– This is the biggest cultural project of the European Union and probably the biggest individual cultural project in the world. In this moment, I can guarantee that by the end of next year we will have the winning bid book, however this will not be enough in this important year. It is necessary that we have support from media, city institutions and enterprises, confirmation from potential donors from public and private sectors, as well as from the European Union – said Fajgelj and added that these efforts can only be achieved by unity.

Director of the Company for Urban Development of Pécs, Peter Merza said that their candidacy seemed like a mission impossible for them in the beginning, but turned out not to be. He added that this is a big chance for Novi Sad to place itself on the map of Europe, because Pécs was unknown before, and now this changed. It should also be decided what we want to present to Europe, what is the message of our city, our culture and life. Furthermore, we should decide what do we want to show to Europe, whether this will be cultural programme or programme of city development. They thought, as Merza said, that this is a city development programme. He is absolutely certain that Novi Sad will succeed if it has a good brand, logo, identity and clear message. The programme that is being prepared should be focused both on culture and on city development, on the city itself and on citizens. If we win the title, we will have access to plethora of programmes. He used this opportunity to offer his and help of city institutions in Pécs during the realisation of the project.

Below you can find exhaustive list of all activities of the Board in 2014, which were undertook in order to win the title of European Capital of Culture in 2021.

You can read the activities of the Organisation Board here.