Concert in Egység: Saxophone Through Romanticism, Impressionism and Contemporary Art

The ‘Saxophone Through Music Epochs’ concert, whose main idea is to present an atypical instrument in the form of a typical recital and bring it closer to audience, performed by saxophonist Srđan Paunović and pianist Valentina Nenasheva, will be held in the Egység Cultural Station, on Wednesday, 7 October at 8 p.m. 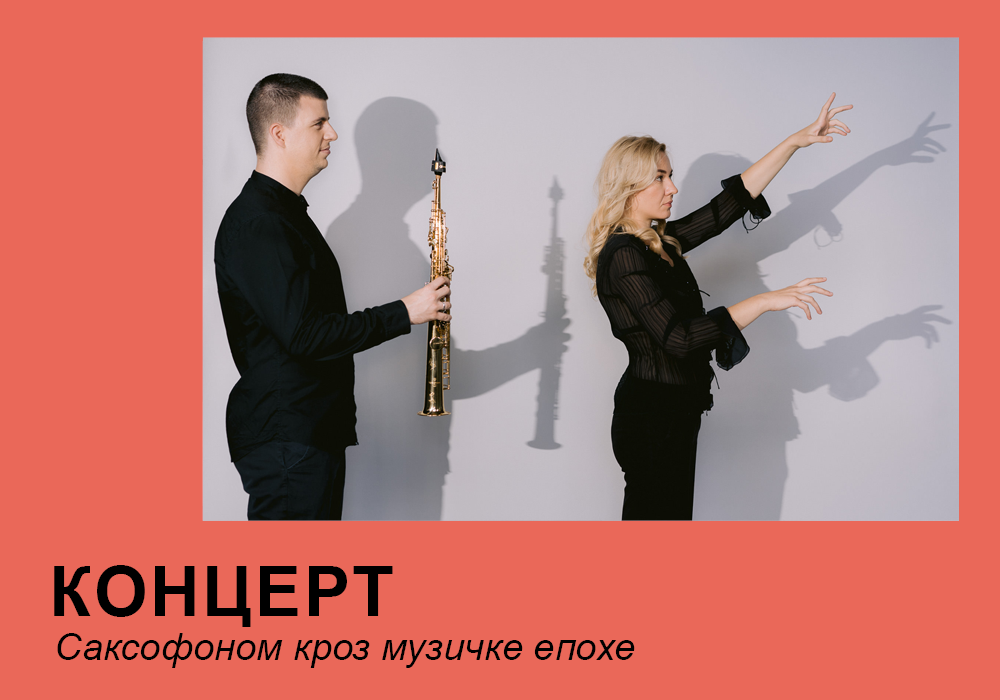 ‘Personally, I find the concert important because of its programme that sums up my knowledge and experience acquired during the years of studies and working in the field of music, and as such, it presents my perspective on working in the field of classical music. The concept of the programme presents a wide range of expressiveness of saxophone in the genre of classical music, so I hope that we will achieve the desired effect, and influence the perception of the instrument among the audience,’ said saxophonist Srđan Paunović.

The audience will travel through romanticism, impressionism, contemporary music, i.e. through authors’ magnum opuses that was permeated by the elements of the entire music heritage, and according to Mr Paunović, playing them on the saxophone in 2020 presents a unique ‘time machine’.

‘I have decided to include in the programme the two masterpieces for other instruments, which is not established practice, and is a bit ‘risky’ move, but I tried to find some universal sound tones, especially in the ‘Prelude to the Afternoon of a Faun’, which is a symphonic poem, and requests a skill from the saxophone to turn flute into oboe from bar to bar, and vice versa, then again into flute, then horn, clarinet, violin, etc. Brahms was equally performed on the clarinet and viola. Therefore, I tried to mix the timbre of clarinet, viola and saxophone in the Sonata. Contemporary music is being performed at festivals more often, but soloists are still afraid when including it in the programmes of their solo recitals, and that inspired me to take another risk – two contemporary compositions in the programme. However, I think that the audience will accept both works, having in mind that both of them are programme compositions. ‘La Lune en Paradis’ is a double-fugue work inspired by Camus’ ‘Caligula’ and motifs of Caligula’s obsession and suffer with the Moon, while the ‘Ku Ku’ describes organic-farm chicken comparing to industrial ones in a funny way, by using tonal options of soprano saxophone,’ stressed Srđan Paunović.

Saxophone is a modern instrument, who has a relatively modest repertoire when it comes to works that were written for the instrument. Some of the first works were written by French authors in the mid-19th century. The saxophone seemed to have a ‘bad luck’ and did not attract the attention of great neoclassical composers and modernists who were aware of tone characteristics of the saxophone and occasionally used it in their orchestrations.

‘During the second half of the 20th century, when numerous soloists across the world tested the limits of expressive and technical possibilities of a saxophone, the instrument was finally rapidly increasing in popularity and became ‘the violin of contemporary music’ – developed techniques, effects, quarter tone scale, possibility to offer dynamics in a moment, from subtone to fortissimo. All of this became very attractive to artists, Edison Denisov, Luciano Berio, Karlheinz Stockhausen, etc., who began to write compositions for saxophone in the second half of the 20th century. However, playing transcriptions of works of diverse epochs settled down in the concert practice, from baroque to renaissance music, romanticism, and numerous virtuosos surpass capabilities of the instrument and manage to perform some of the most demanding modern works on the saxophone written for other instruments,’ explained Srđan Paunović.

The ‘Saxophone Through Music Epochs’ project is one of the 42 projects that received funds within the ‘Artists. Now!’ public call and one of the main goals of the call is to strengthen the local cultural scene. Srđan Paunović said that the ‘dark side’ of working in the field of classical music in Serbia is that it is often unprofitable, so this call is very important for artists.

‘It gives us hope that things will change for the better. I am very glad that the ‘Novi Sad 2021 – European Capital of Culture’ Foundation recognised my project as something that will strengthen the local cultural scene. I have several interesting projects that I hope I will manage to implement after this one, with which I want to introduce myself as an artist and present my perception of music and the instrument,’ ended the musician.