The Awakening of Fruška Gora

‘The Awakening of Fruška Gora’ conference was held in the beautiful atmosphere of the Peace Chapel in Sremski Karlovci on Wednesday, 13 June. Mr Igor Mirović, President of the Provincial Government, presented infrastructural projects implemented by the Government of the Province on the territory of Fruška Gora Mountain, the oldest National Park in Serbia, while Mr Nemanja Milenković, CEO of the ‘Novi Sad 2021 – European Capital of Culture ‘ Foundation spoke about cultural programmes that are planned up to and during 2021.

During the conference, plans for more accessible, visible and attractive Fruška Gora were presented. The conference was attended by the representatives of the Provincial Government, representatives of the cultural institutions and media, presidents of municipalities of Irig, Sremski Karlovci and Beočin and many public figures such as Nele Karajlić, Nenad Okanović; Dimitrije Banjac, Nikola Škorić and Jugoslav Krajnov, the actors of the ‘Državni posao’ TV show and others. 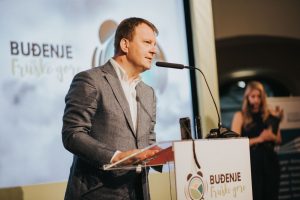 Mr Igor Mirović, President of the Provincial Government, emphasised that Fruška Gora is much more than geographical toponym for the Autonomous Province of Vojvodina. He said that investment in reconstruction and development of Fruška Gora is one of the most important strategic objectives: ‘Important cultural places that have lasted for centuries and have been created by the people such as Branko Radičević, Jovan Grčić Milenko and many others for decades, deserve to be grounded on values of our common future and future of Fruška Gora.

He added that the importance of Fruška Gora is reflected in the existence of medieval orthodox monasteries, as well as Sremski Karlovci and Irig as the centres of Serbian spirituality and culture. Hence, the focus of the Provincial Government will be preservation and revitalisation of these timeless witnesses of our history.

The ‘Novi Sad 2021 – European Capital of Culture’ Foundation will implement more than 30 cultural projects, which will include 11 institutions, over 300 cultural workers and more than 40 non-governmental organisations. 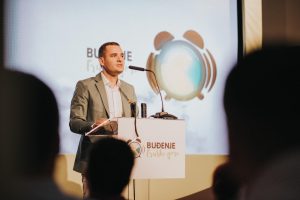 Mr Nemanja Milenković, CEO of the ‘Novi Sad 2021’ Foundation emphasised the importance of ‘The Awakening of Fruška Gora’: ‘The potentials of Fruška Gora are primarily geographical. We forgot that Fruška Gora is in the middle or close vicinity to Novi Sad and Belgrade, the most important tourist destinations. We believe that European Capital of Culture project is a great chance to start a new potential, the social one. I will remind that besides Novi Sad, three municipalities of Fruška Gora – Sremski Karlovci, Irig and Beočin are included in the ECoC project. This is the opportunity to bring these municipalities closer to Novi Sad as the holders of the title and strongly connect public and private sectors, non-governmental organisations and religious communities through the slogan ‘4 New Bridges’. This is what we are symbolically doing here, where differences do not exist. Where everybody is equally important in order to get more accessible, visible and attractive Fruška Gora.’

The conference was moderated by Kristina Radenković, the actress and moderator who shared with the audience her impressions about Fruška Gora for which she has special feelings.

Nele Karajlić, our famous musician, frequent visitor of Fruška Gora, said that culture is a powerful weapon for supporting the awakening initiative and cultural restoration of Fruška Gora, while the actor Nenad Okanović emphasised that he often finds peace in monasteries of Fruška Gora and he hopes he will spend more free time with his friends in this region. 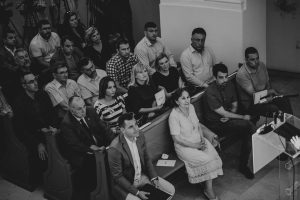