The Embassy of Egypt in Serbia organised the first visit of the Group of Francophone Ambassadors to the Provincial Government of Vojvodina and the city of Novi Sad within the Month of Francophonie, which is dedicated to the French language and culture. 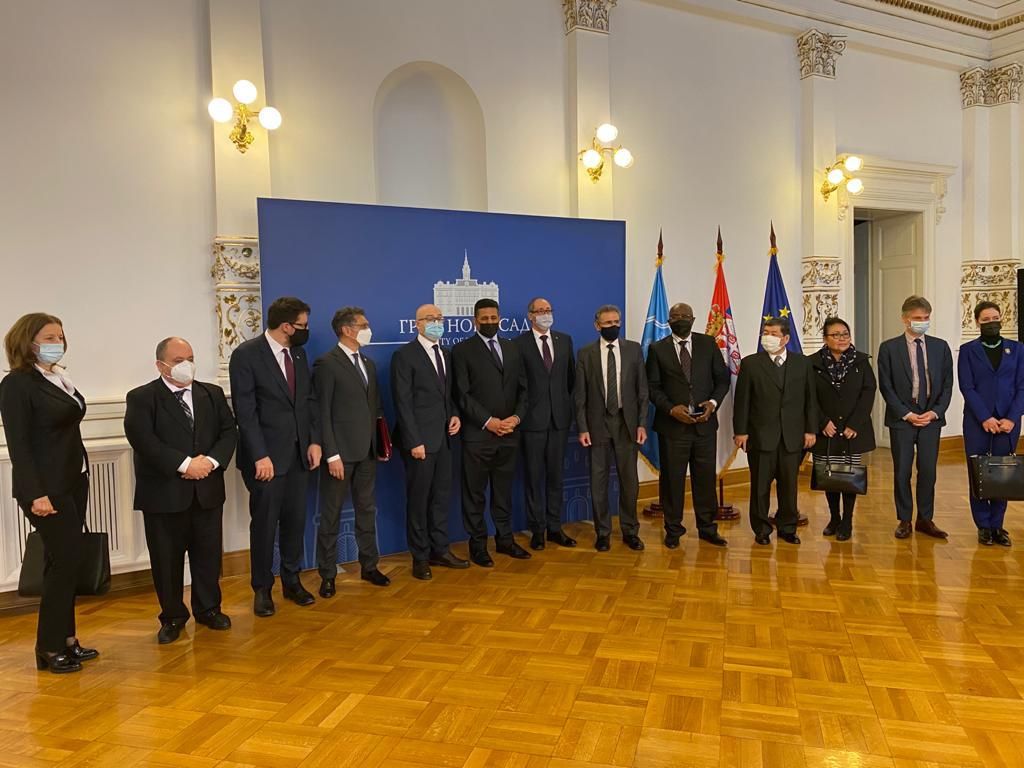 On this occasion, Mr. Amr Aljowaily, Ambassador of Egypt to Serbia and President of the Group of Francophone Ambassadors in Belgrade, expressed his satisfaction with the constructive meeting with Igor Mirović, saying that ‘the meeting with the Prime Minister of Vojvodina set the framework for cooperation between the province and Francophone countries in various fields, including cultural, economic and educational aspects.’

The meeting with the mayor of Novi Sad, Miloš Vučević, was no less cooperative, during which Aljowaily stated that it was ‘a great opportunity to jointly explore the Francophone dimension of future activities of the city of Novi Sad as the European Capital of Culture in 2022.’ He also added that one such step could be the finalisation of the Agreement on Establishing Friendship and Twinning between the cities of Alexandria and Novi Sad, taking into account the importance of the Mediterranean dimension and cultural continuity with the Arab world and Africa, which Alexandria clearly shows.

On this important occasion, Nemanja Milenković, the director of the ‘Novi Sad 2022 – European Capital of Culture’ Foundation presented a project of national importance to the Group of Francophone Ambassadors, emphasizing that French culture had an extremely great influence on Serbian culture and the European cultural scene.

‘The title of the European Capital of Culture was initiated back in 1985 by Jack Lang, French Minister of Culture, and Melina Mercouri, Greek Minister of Culture, with the visionary goal to connect people in Europe and to raise awareness of a common history and values. The title of capital of culture is still based on these values, while the Novi Sad 2021 – European Capital of Culture Foundation has implemented or will implement the numerous programmes that promote the culture of countries from the Francophone speaking area in the title year. In addition to cooperation with the Embassy of Egypt, we have implemented numerous projects with the French Institute, primarily on various artistic residences, as part of the Literature Night, where we cooperated with the Embassy of Poland, while events with the Wallonia-Brussels International and numerous French artists and organizations will be implemented during this and following years,’ said Milenković.

Aljowaily said that the first visit of the Group of Francophone Ambassadors to the Francophone Centre of the University of Novi Sad aims to improve further educational ties with Francophone universities. The Ambassador of Egypt pointed out that Senghor University in Alexandria plays an important role as one of the five operational branches of the International Organisation of Francophonie. He also added that there are many promising opportunities for cooperation with numerous French branches at Egyptian universities as well as with the French University in Cairo, inviting related educational institutions to explore these connections and thus get to know Francophone African and Arab countries.

Francophonie consists of 300 million people who speak the French language on five continents, and March is the Month of Francophonie all over the world. The number of Francophones will most likely triple in the next 30 years, and French will thus become the second or third world language.

Photo: Embassy of Egypt in Serbia