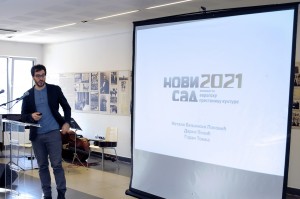 Members of the expert team for the candidacy of Novi Sad for the European Capital of Culture in 2021, Natali Beljanski, Darko Polić and Goran Tomka, got a task to make a strategic document based on which programme and project activities will be planned and realised, i.e. that contains basic guidelines for drafting application. Drafting of the strategy began in 2013, and the first version was discussed in front of the Board during the first session in February 2014. The final version of the Draft Strategy Novi Sad 2021 was adopted at the eighth session of the Organisation Board on 14 October 2014.

It is a document which is the result of research and planning of the team that wrote it. The ideas in this document encourage people to think about development of Novi Sad as a capital of culture, as well as possibilities to make this development reality. Because of this, the process of planning the project Novi Sad 2021 began by including cultural sector, local citizens and civil society. After series of discussions with representatives of over 50 cultural organisations and institutions, which attended meetings of work groups, certain common problems surfaced regarding the condition of culture in Novi Sad and overcoming them would be base for creating the project Novi Sad 2021. Having in mind the lack of national, provincial and local strategy in the field of culture, the proposed projects cover wide area of possible directions of cultural development and numerous topics. They, of course, are not the sum of all necessary, let alone all possible projects in the city, but those which fit into the coherent concept of the project for the European Capital of Culture. Due to unstable economic situation, projects that are more complex, potentially uncertain and demand larger budgets (such as reconstruction of the fortress, construction of a concert hall, construction of pedestrian bridges, etc.) were consciously avoided. Novi Sad 2021 is a platform for development of creative potentials of Novi Sad. This project, above all, should motivate and inspire cultural workers, as well as all citizens, to re-examine all current values and set new goals for cultural development of the city.

Strategy is based on four pillars: (1) public institutions of culture, (2) independent cultural scenes, (3) cultural and creative industries, and (4) everyday culture of citizens and amateurism. Each of these fields has its specific challenges and possibilities, resources and needs, therefore the programmes that are proposed for them are based on specific characteristics of each of them.Transverse projects are proposed in those aspects where activities solve common needs and problems. Within each of the pillars, there are interventions in form of projects, programmes and initiatives that have four directions of development, i.e. four topics: a) Re-connect with the idea of unity through creativity. It is about projects that deal with making new connections or re-connecting the old ones, between groups, activities and communities that strive for social cohesion; b) Empower, which strives to strengthen capacities of individuals and organisations for participation in local economy, culture and politics; c) Localize, topic that strives to manage existing and create new public spaces for meeting of cultures, entrepreneurship in culture and cultural development; d) EuropeaNS with the main task of strengthening the existing and creating new cultural, social, political and economic connections between local stakeholders and foreign partners from Europe, i.e. profiling Novi Sad as a cultural capital of Europe, firstly through creation of new connections with European cultural space, as well as through discovering and activating the existing ones.

The projects in focus will be defined according to models of cultural management that are in accordance with the needs of users (owners, lessees, local citizens and the City of Novi Sad), spacial possibilities (are they in spirit of the place, quality and type of object, degree of protection), relationship towards environment (vicinity of green and other public spaces, the Danube, etc.) and needs of profiling Novi Sad as a cultural centre and candidate for the ECoC in 2021.

Art Quart is envisaged as a new centre of cultural production of Novi Sad, research centre and centre for exchange of knowledge in the field of visual arts, design, performing arts, music, new media, computer development and software. Chinese Quarter with the Czech Magazine in Novi Sad is one of the exceptional example of possible successful redefinition of industrial space into space intended for culture. Year long interest of cultural public of Novi Sad for Chinese Quarter and the fact that certain artists and organisation, on their own initiative, have already leased some of the spaces on this location for galleries and workshops, speak in favour of the claim that Chinese Quarter is possibly the most adequate space for this type of activities. Transforming Chinese Quarter with the Czech Magazine into Art Quart would be a visionary project of the city, both in terms of preserving industrial heritage of Novi Sad and in terms of creating creative industries. The old Marshalling Yard (both parts of it and a whole) – the central building of stokehold with the loop is especially interesting for redefinition into space for modern art production, due to its crucial cultural-historical importance and the fact that the loop was designed by Eiffel’s team.

Furthermore, the important conditions for the development of culture would be provided by managing certain public spaces. Landscaping parterre of Gallery Square for public use and reducing number of parking spaces are the main goals. By building a pavilion of a city gallery along the northern façade of the Pavle Beljanski Gallery, the city would finally get an exhibition space for exhibitions of medium and large format. By landscaping the space between the Museum of Vojvodina and Museum of Contemporary Art, the city would get a safe public space in the old core of the city.The space would be used for promotion of activities of both institutions and for organisation of activities in the open (collections of sculptures, occasional exhibitions, promotions, discussions, etc.).

Nikolajevska Porta and Trifković Square are two exceptional public spaces that are not landscaped and safe, i.e. are used as parking spaces. Apart from Liberty Square and Katolička Porta, the city would start to use two more magnificent historical ambiences that would improve the quality of public spaces of the protected old core of the city and offer new chances for development.

Landscaping urban pockets is the project of improving small public spaces that are model of small investment with a significant effect on life of public spaces in different parts of the city (three public spaces in Almaški Neighbourhood, the corner of Železnička and Maksim Gorki Streets, plateau next to the Mall in Novo Naselje, Prota Mihaldžić Square in Suburbium, etc.). By renovating squares, the city will remain without part of the parking space. Public spaces are also green, recreation spaces of the city, therefore small projects can renovate the existing and build new (planned) green spaces: reconstruction of the ‘Five Heads’ pavilion in Kamenički Park, construction of enclosure around Danube Park, landscaping green surfaces along Boulevard of Europe on the Novo Naselje side and others.