Forum “What Defines Us – What Unites Us” in Novi Sad

On Thursday in Novi Sad, President of the Organizing Committee of Novi Sad 2021, Nemanja Milenkovic, officially opened the forum called “What Defines Us – What Unites Us”, a series of interviews with stakeholders, representatives of the academic and diplomatic circles, as well as with representatives of civil sector. Forum, organized by the Konrad Adenauer Foundation, European Movement in Serbia and magazine Diplomacy & Commerce, was held with the support of the City of Novi Sad, and the focus was on the European integration of the Western Balkans, in the light of contemporary challenges, such as Brexit, presidential elections in the US, and the Arab Spring.

After addressing of the Director of the Foundation Konrad Adenauer, Norbert Beckmann-Dierkes and the Secretary General of the European Movement in Serbia, Aleksandar Simurdić, the gathering guests were addressed by Goran Svilanovic, Secretary General of the Regional Cooperation Council, which has once again underlined the importance of the project Novi Sad 2021.

The first panel dealt with the issue of Brexit and how this challenge can affect the future of the European Union, and the speakers were: Marina Jovicevic, Head of the European Union in the Ministry of Foreign Affairs of the Republic of Serbia, Goran Svilanovic, Secretary General of the Council for Regional Cooperation, Jože Mencinger, Professor at Slovenian Institute of Economics, Oskar Benedikt, Deputy Head of the EU Delegation to Serbia, Dejan Jovic, Professor at the Faculty of Political Science, University of Zagreb; Steven Blockmans, Professor at the Center for European Studies (Centre for European Policy Studies – CEPS), Professor Rumyana Kolarova, Head of the Department of Political Science at the Bulgarian University St. Kliment Ohridski, Arjan Dyrmishi, Head of Department for European and Security Studies at the Institute for Democracy and Mediation in Tirana, as well as Tomas Žornaczuk, Head of the Central European program at the Polish Institute of International Affairs (PISM). The panel was moderated by Ljubica Gojgić and Borislav Papic. 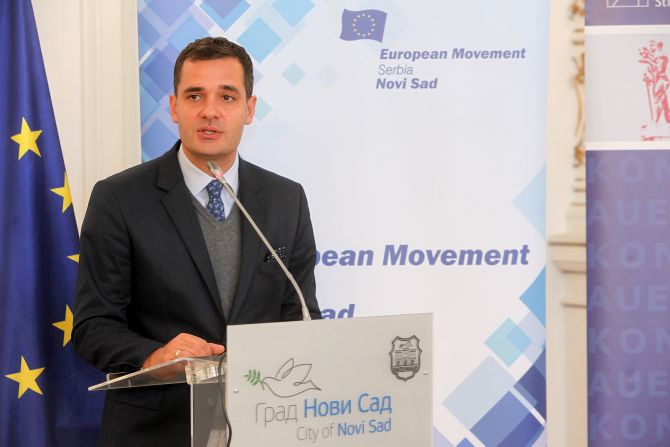 President of the Organizing Committee of Novi Sad 2021, Nemanja Milenkovic

The second panel was focused on the impact of presidential elections in the United States on European politics, and was attended by Ambassador Istvan Gyarmati, President of the International Center for Democratic Transition, Vuk Jeremic, Jože Mencinger, Professor at the Institute of Economics in Ljubljana, Selmo Cikotic, Dean of American University in B&H, Dragan Štavljanin from Radio Free Europe, Dejan Jovic, Professor at the Faculty of Political Sciences in Zagreb, Bojan Brkic, RTS journalist, and Zoltán Pogats, Lecturer at the Hungarian University of Western studies. The panel was moderated by Ljubica Gojgić and Gorislav Papic.

The third panel, which dealt with the events in the East, was opened by HE Christine Moro, French Ambassador in Serbia, while the participation in the talks took Ambassador Istvan Gyarmati, President of the International Center for Democratic Transition, Ambassador Mihajlo Brkic, former Ambassador of the Republic of Serbia in Kuwait, Selmo Cikotic, Dean of American University in BiH, Dragan Štavljanin from Radio Free Europe, Tuba Eldem,  Professor at the Department of Political Science and International Relations of the University Yeni Kavak in Turkey and Rumyana Kolarova, Head of the Department of political Science at the Bulgarian University St. Kliment Ohridski.