The Programme Council of the Organisation Board Established 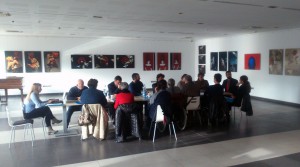 The first session of the Programme Council

On Thursday, 4 December 2014, the first session of the Programme Council for the European Capital of Culture was held in the Cultural Centre of Novi Sad. This officially constituted this advisory body that works under the Organisation Board of the candidacy. The Programme Council is a collegial body, consisting out of eminent experts from different fields of social life, formed with purpose to offer expert, advisory and logistical help to members of the Organisation Board in the field of programme and project activities and in the process of writing the bid book.

The Organisation Board of the initiative of Novi Sad to bid for the title of the European Capital of Culture, adopted the decision on establishing the Council on the 8th session on 20 October 2014, and at the same time it determined the scope of work of the Council and its members. The elected members are: Dr Jasna Jovanov, Zoran Vučević, Dr Nađa Kurtović Folić, Dr Agneš Ozer, Ljiljana Čakmak, Milica Paskulov, Dr Vladimir Gvozden, Dr Zoran Đerić, Radovan Jokić, Milan Vukašinović, Dr Momčilo Bajac, Tatjana Kalezić, Muhamed Zilkić and Radivoje Stojković.

All members expressed their willingness to contribute to the work of the Council and wish to help in realisation of the goal – candidacy of Novi Sad for the European Capital of Culture. In this respect, a decision was made to intensify the work, cooperation and coordination between the Council, Board and expert teams after the annual press conference of the Organisation Board (18 December).

During the constitutional session, as it is usually the case, the discussion was mostly about procedural and formal issues, predominantly the manner of work and decision making and the role of the body that was being constituted. Prof Momčilo Bajac was unanimously elected the Chairman of the Council. Tatjana Kalezić was elected Deputy Chairman, also unanimously. With this, the members completed the organisation structure of the Council and elected their official representatives.