After the announcement in Brussels, numerous Serbian, regional, as well as the most important European media reported that Novi Sad became the European Capital of Culture for 2021, and the message reached all meridians.

The news was among the first published by the official website of the European Commission, and in the text, among other things, the statement of the European Commissioner for Education, Culture, Youth and Sport, Tibor Navračić, says: “I am convinced that this title will bring significant long-term cultural, economic and social benefits to Novi Sad, as it was the case with many previous European Capitals of Culture.”

One of the world’s most influential news agencies, the Italian ANSA, shared this information throughout the world, as well as a news organization La Gazzetta di Lucca, while the leading tourism youth portal Lonely Planet, introduced the concept of the candidacy of Novi Sad, noting that the city, known for the EXIT festival, has “an excellent opportunity to present to the world and attract more tourists through variety of events that would be organized during the year.” The news was also interesting to a number of Austrian and German media, and they also wrote and spoke about the title, Austrian Orf Radio, Finanzen, Germany’s Deutschlandradio Kultur, News Deutschland, as well as the famous Deutsche Welle , which pointed out that the title will certainly contribute to the strengthening of cultural ties between Serbia and the European Union. This information has caused great attention in the Romanian media, due to the fact that, in addition to Novi Sad for the European Capital of Culture 2021, Timisoara was also declared. Numerous media from Bosnia and Herzegovina, as well as Croatia and Montenegro also wrote about the title. 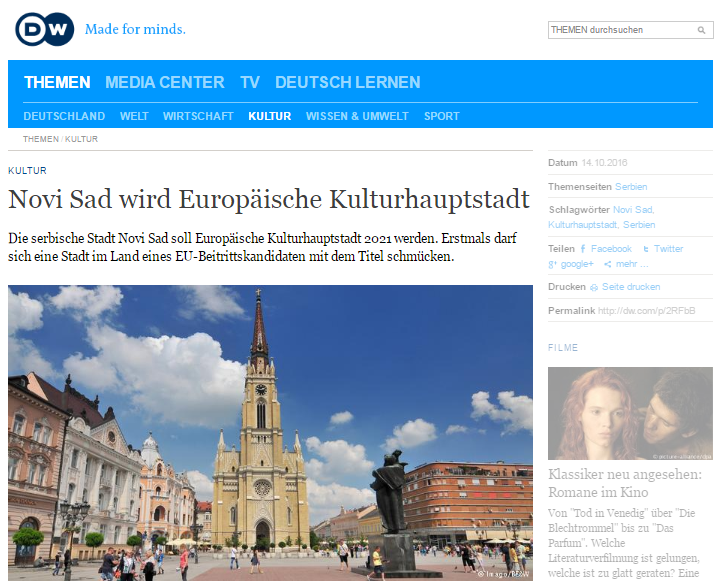 The project Novi Sad 2021 received congratulations from around the world, among which are certainly very important those by the cities previously designated as European Capitals of Culture, such as Wroclaw, Plovdiv, Galway, Matera, Rijeka, San Sebastian, Timisoara.

Congratulations also came from prominent individuals and institutions, such as the Government of the Republic of Serbia, EU Ambassador to Serbia Michael Davenport, the Embassy of Denmark to Serbia, the Regional Cooperation Council, the European Commissioner for Education, Culture, Youth and Sports, Tibor Navračić, Ambassador of Italy in Belgrade, HE Giuseppe Manzo, the Museum of Contemporary Art of Vojvodina, European Youth Parliament Serbia, German Embassy in Belgrade and many others.